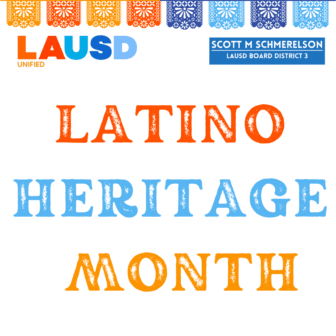 I will be honoring Latino Heritage Month, as the Board resolved to at yesterday’s meeting. Throughout the month, we will be encouraging all students, faculty, administrators, and parents, to commemorate and celebrate the historical contributions that Latino/a/x people have made to Los Angeles, California and the United States.  To that end, I am sharing inspiring quotes from inspiring leaders in our communities – from all walks of life. 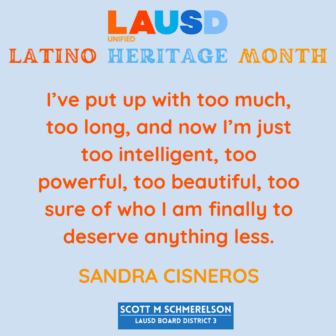 Sandra Cisneros is an American writer, best known for her first novel, “The House on Mango Street.” She has worked as a teacher and counselor to high-school dropouts, as a poet-artist-in-the-schools where she taught creative writing, and even a college recruiter. 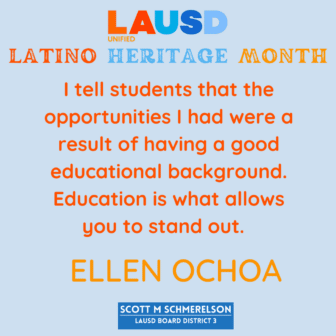 Ellen Ochoa is an American engineer, former astronaut and former director of the Johnson Space Center. In 1993, Ochoa became the first Hispanic woman to go to space when she served on a nine-day mission aboard the Space Shuttle Discovery. She was the first Hispanic director and the second female director of the Johnson Space Center. Ochoa received a bachelor of science degree in physics from San Diego State University and graduated Phi Beta Kappa in 1980, before earning a master of science degree and a doctorate from Stanford Department of Electrical Engineering in 1981 and 1985, respectively. 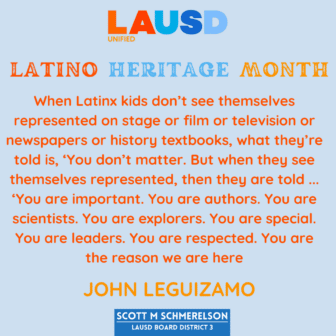 John Leguizamo is an American actor, comedian, and film producer. who has appeared in over 100 films, produced over 20 films and documentaries, starred on Broadway, won a Special Tony Award), and has produced or starred in many television shows. 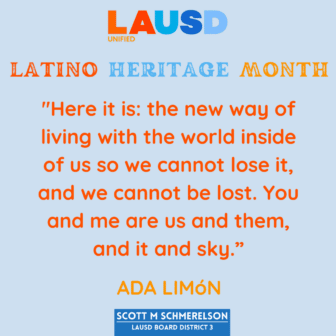 Poet Ada Limón is originally from Sonoma, California. In 2001, she received an MFA from the creative writing program at New York University. In July of 2022, Ada Limón was appointed the United States poet laureate. Carla Hayden, speaking for the Library of Congress, said: “Ada Limón is a poet who connects. Her accessible, engaging poems ground us in where we are and who we share our world with. They speak of intimate truths, of the beauty and heartbreak that is living, in ways that help us move forward.”